This film was like s stage production. One act, followed by act two, all wrapped up in the climatic third and final act. It reminded of a modern film Closer, which was in fact a movie deriving by a play. Each and every scene, for both films, stays self-contained, and focused in on the current narrative. There are no split screens; no jumping back and forth from one perspective to another, each character gets their due and their story to tell.  This film is a classic due to its innovative narrative, and the way in which director Akira Kurosawa told the story. The story is set up clearly, with no mindless distractions. A group of witnesses, as well as the party in which the crimes were committed, have been gathered to the trial of an accused after a garish murder, to each tell their version of the string of events, each one differing from the other, never fully piecing together a complete story. A priest and a woodcutter, both witnesses, recount the story to a man who’s taken cover with them, trying to escape the rain.

Imagery is crucial to this film, right from the very start of it. When we as a viewer first see the samurai’s wife, she is clothed all in white, with a white veil covering her face. She is the image of virtue, virginity, and delicacy, the white is an angelic glow. She is cast immediately through wardrobe as pure, leading the audience to immediately perceive the character, shaping our perceptions of her before her unfavorable actions later in the film.

The direction of the film makes great usage of the natural setting it takes place in. It’s bizarre to see in a classic film such a dedication to showcasing nature as much as the actors. Kurosawa allows many shots that focus on the sky, whether it is a shot to examine the beauty or whether it is in the perspective of the character. For what use? As the samurai, the wife and the bandit retell the story from they’re viewpoints, often time their eyes drift up. Is there a power guiding their choices? Are they praying, believing that they’re viewing the heavens? Are they seeking solace, making a wish? Or are they simply searching for a guide despite the foliage that blocks their path.

The main purpose of this film is to explore the ideology of humans, why they do what they do, why they lie and why they cheat others.  Towards the end of the film the phrase “It’s human to lie” is muttered, and throughout this film it’s seen as truth. Whether or not it’s truly acknowledged, every testimony is glamorized, fictionalized or terribly skewed. In particular the group that consists of the bandit, the samurai and the wife. Each version of the tale did nothing to elevate their crimes. The bandit admitted to raping the wife and killing the husband, putting emphasis on how grand the final battle between the two was. The wife speaks of begging the bandit to kill her husband, or the husband to kill her, so racked with guilt. However, when the woodcutter finally tells the true tale of events, the previous incarnation of events wash away. 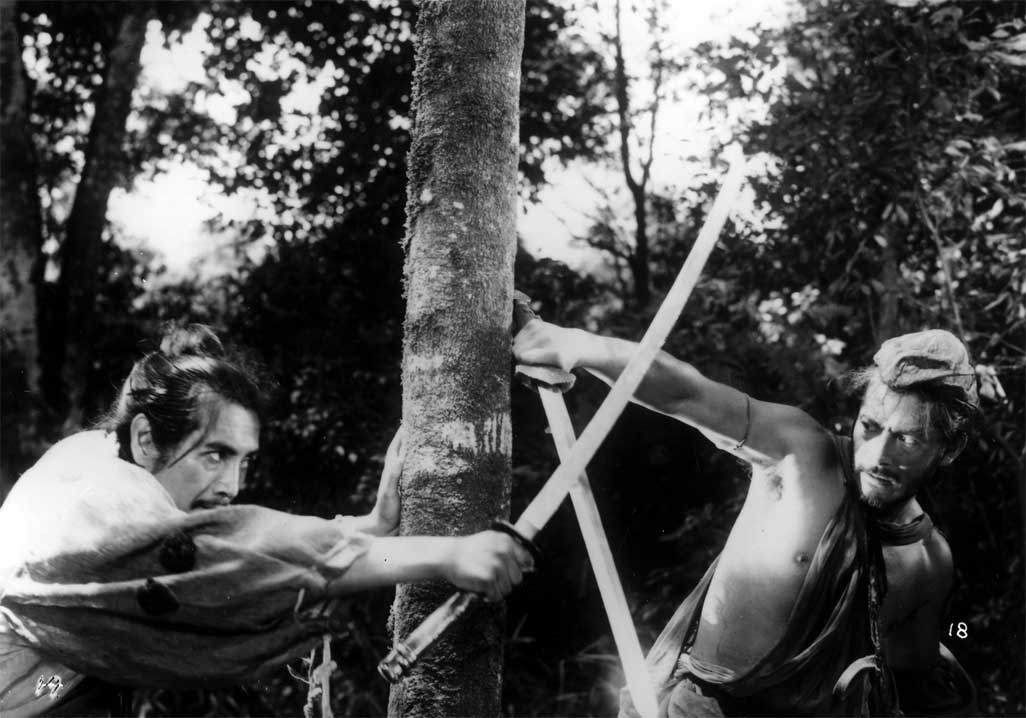 The woodcutter saw the two men abandon the wife after the bandit has raped her. Neither man wishes to die for her. The wife then shames them into a fight and it truly showcases the fragility in humans. We watch as the two men stand, shaking out of pure terror, distraught about the fight that is taking place, the truth is apparent. Neither the “fearsome” bandit nor the respected samurai wanted this fight, wanted to die, but they would rather bold faced lie about it than feel the dishonor of being weak. The wife would rather speak of feeling guilt than admitting her persuasion. Reality may be swayed by differing parties, but the frankness of human nature resides. What is more powerful? Fear or pride?

Ultimately in this film it’s both. It’s fearing their lost honor that provokes the two men to fight to the death, begging at it not to come. It’s fear that settles in the priest’s heart, which allows him to react harshly to the woodcutter, who tries to offer an abandoned infant a home. Fear controls many emotions in this film, and the underlying theme is the fear in men and what they can accomplish, and how they can wreak havoc in the course of a lifetime. Rashomon takes a harsh look at how individuals can take lives, lie outwardly, and succumb to cowardliness. A classic, Kurosawa takes great lengths in portraying the follies of men, and the way in which a truth to one individual may not be the truth to another.